It has been seven weeks and two days since I decided to pierce my septum. It’s certainly something to get used to. You become much more aware of your boogers, and your ability to blow your nose, and I don’t think I’ve ever gone through as many q-tips in my life as I had in these past weeks. I am two weeks away from being “fully healed,” which allows me to change rings and get artistic with it. I’m excited. Minus the fact that I still have to hide it at work.

So, let’s pick up where we left off: the CTJ (Come to Jesus) meeting.

After the meeting, my mind was consumed with frustration. I wanted to quit right then and there. I wanted to find an employer who was tolerant of self-expression in any form. I wanted to find a job where I felt safe being myself. However, I had quit a job before. I up and left and I still hate that feeling I had when I left that place. They were good people, and I was just in a bad place, so I had to make a decision for my own health, but it still hurts to this day that I left the way I did, so I did not want to duplicate that feeling.

So, I reached out to my friends (most of whom also have visible tattoos and piercings and work in a professional setting) and I told them I was looking for a new job. I had the time off to set up interviews, to travel, and to put together a decent resume. I traveled to Mankato, Mason City, Fairmont, and Edina for four interviews in a three-day span. It was overwhelming, considering I was still such an emotional wreck. I took my little social experiment one step further. Two of the interviews, I chose to keep my nose ring out, and two interviews, I kept the nose ring in.

Of the four jobs I interviewed for, three of them called me back saying they were interested in a second interview. One-third of those interviews, I had my ring out.

It was at that point, I really had to start thinking. Do I want to leave my hometown? Do I want to leave my job (keeping in mind I’ve wanted to be a professional writer pretty much all my life)? Can my employers see past my body modifications and truly appreciate the value of my work? Questions were flooding my mind while I was already cradling the gods of exhaustion in my arms. I had to start making some serious choices. I don’t like doing that, especially on a time crunch.

So, I came back to the office, with my nose ring still out. I still had not even had two weeks of healing and I was not about to sacrifice my entire nose for the sake of some PC bullshit at work. I walked into my publisher’s office and told her that I would need the weekend to be able to feel comfortable enough to move the ring inside my nose. I wanted to work with her. I wanted to continue my career at this newspaper. All I needed was a few more days of healing.

But…I was, again, confronted with resistance. She was not pleased, and I lost it. I told her, “I’m trying here. I just need a few more days to heal, but if that’s not something you can manage then maybe I need to take my skills elsewhere. I thought we worked as a team here, but the only team I see is the team who conforms to what (newspaper owners) say. That’s not me.”

After saying that, I was proud of myself. I haven’t really stuck up for myself before. I usually cave at the whim of whomever is trying to get something out of me, and this time, I stood my ground. I think that’s what I needed in the first place – someone in my corner. And that person just happened to be myself. (P.S. That’s totally okay. Stand up for yourself. You know who you are and what you need out of your life. This is your journey. Don’t let anyone rip your journey away from you.)

My editor then came and talked to me and sat me down. He told me that my publisher was “really going to bat” for me when it came to the parent newspaper company’s wishes. And she was. She was putting a lot at stake for trying to keep me as a part of the team. But she, too, had to stand her ground.

Finally, I went to the publisher’s office and told her that I just needed the weekend to heal. I was sure I’d be able to get the ring up my nose by Monday, and I told her I appreciated her willingness to keep me on staff. She started crying, this time. I don’t see my publisher get too emotional too often. She’s a hardass, and it suits her. It’s gotten her so far, and I cannot diminish the fact that she has worked so hard to get to where she’s at. Her ability to not let people walk all over her is something I hope to grow in myself. She is a role model of mine, no doubt about that. We just have different opinions on different things.

So, we finally came to the agreement: the ring would go up, and I’d keep working. I had to “express myself on my own time.” So, I agreed to it. I kept my nose ring in from 8 am – 5 pm, and anytime before or after that, my septum ring dangles proudly from my nostrils.

The townsfolk have seen me outside of work hours. They know about the nose ring, and I have yet to hear a single complaint about it. Probably because people really don’t give a shit about anyone but themselves, let’s be honest here. However, I like to think that people are tolerant of differences, no matter how slight.

I love my nose ring. My friends love the ring, my boyfriend loves the ring, and now that I’ve been through all of this crud, this silly, little nose ring is a symbol of being able to stand up for myself – to show myself that nothing is set in stone, and if I need to change, or I need to move forward elsewhere, I can. Jobs will come and go, paychecks will come and go, but your self-journey is the thing that matters.

“I hope you never sell yourself short. I hope you never think less of where you are because you have not made it as far as you thought you would. It took a lot for you to be able to make it to this point. It took years of hard work just to be here. And you may have a long way to go, but this road is lined with hope that in time you will see the fruit of all the work you are putting in.” -Morgan Harper Nichols

One thought on “The Great Rural Social Experiment: Part 3” 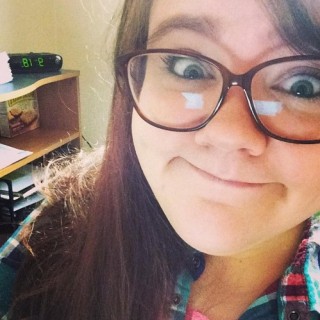